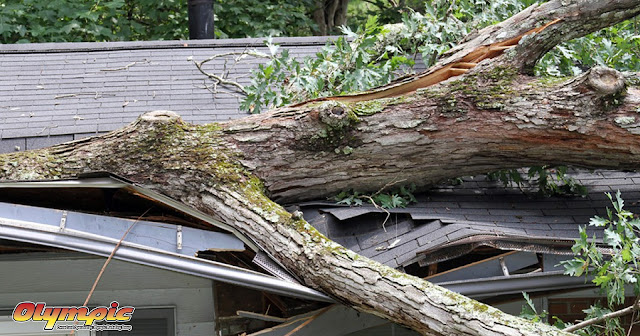 The recent storm surged through much of Northeastern US and left destruction in its path.  Some destruction included many fallen trees or tree branches landing on houses, which damaged many roofs.  Other damage to the roofs were simply due to the strong 70+ mile per hour winds.  Luckily, Olympic Roofing has many crews to help those affected.

Olympic Roofing serves Southern New Hampshire, including Manchester, Nashua, and Salem, NH as well as throughout Eastern Massachusetts including Boston, Greater Boston, Merrimack Valley, and throughout the Cape.  We will work with your insurance company to help expedite your roof repair, including any damages to your gutters.


Olympic Roofing is based in Topsfield, MA and is Licenced, Bonded & Insured.
You can also email us at admin@olympicroofing.com .

Q A squirrel or several squirrels ate a hole in my lead flashing, and now it leaks badly when it rains. Water from the roof runs down into the hole. The top of the flashing is cemented into the chimney between the bricks. The job appears to be well done and has lasted many years. The hole is about the size of a squirrel’s head. How can I repair it? A The squirrel is doing what it has to do to shorten and sharpen its teeth: gnawing. The lead is just right for him: soft but able to keep wearing down the teeth. Buy a heavy-duty piece of sheet aluminum or galvanized steel big enough to cover the hole and surrounding area. Lead flashing around chimneys is usually not glued to the roof, so lift it carefully, slather the roof and patch with roofing cement, and insert the patch under the flashing. If the flashing is glued to the roof, you can put the patch directly on top. Putting the patch under the flashing might work better, so keep an eye on the on-top patch and see h

Q. Q. I noticed white powder on my concrete basement floor along the full length of one side of the foundation. What is it and do I need to take action? I’ve never had water in the basement. A. A. It’s efflorescence, the leaching of lime from the concrete by water. The water is moisture, but enough of it is there to do the leaching. It’s harmless. You can open the basement windows to pull out the moisture. It’s less expensive than a dehumidifier which would also do the trick. You also might consider sealing the concrete or masonry to prevent the water from entering the masonry altogether and put an end to the efflorescence.

Homeowners often like to tackle home improvement projects on there own. Some of them are manageable others aren’t as easy. The Boston Globe recently ran a story about about a homeowner who tackled what seemed to be a simple home improvement project and ended up being a 5 day nightmare. If you need any roof repairs or roof projects it is wise to hire a professional.   It is not worth the liability and the time that it takes to launch such an adventure. Boston Globe Home Improvement Article